As we're getting closer to a release of VersionPress 2.0, I'm going to blog about a couple of features that are coming as part of that release. Probably the biggest one is database synchronization which enables things like painless staging, team workflows, etc. This area is one of the biggest challenges when it comes to managing WordPress sites and I think we have a pretty interesting solution in v2.

Although the sync / staging functionality is only coming out now, it was actually this very thing that got us started on VersionPress a couple of years back. My personal experience with WordPress has always been that it is a great CMS as long as you can afford to stay in a single instance scenario, but I didn't quite know how to quickly clone the site to a safe environment, test the changes there and merge them back to the live site again. I stress the last part because that is the really tricky one.

Cloning is relatively easy as you can just copy all the files and the database, tweak some settings like the site's URL and that's basically it. The copy & paste approach works well here. Where it doesn't work well, if at all, is the opposite direction. When you have some changes locally, you cannot just drop the production site and upload the testing one because what if there were new uploads in the meantime, new comments, posts, users, whatever? You would lose all that.

So you need to synchronize the two sites, or to merge them. And boy, merging is hard. In WordPress especially because a large part of the site is stored in a MySQL database and databases are generally very unfriendly to merging. They are transactional databases after all. So while WordPress generally benefits from having a database underneath, it also makes some things really hard. Which is what we're trying to solve with VersionPress 2.0.

Let's demonstrate our approach on a technique called staging. Same principles would also apply e.g. in team environments where multiple people have their own WP instances and need to synchronize the work amongst them, but staging is relatively straightforward so let's stick with that.

The point of staging is to have a separate WordPress instance where you can test changes however you want and they will not affect the live site in any way. When happy with the result, the changes should propagate to the live site. You might even have multiple levels of testing sites, for example, dev -> staging -> live, where every two environments are synchronized the same way. Let's use two environments, LIVE and STAGING, for the demos below. 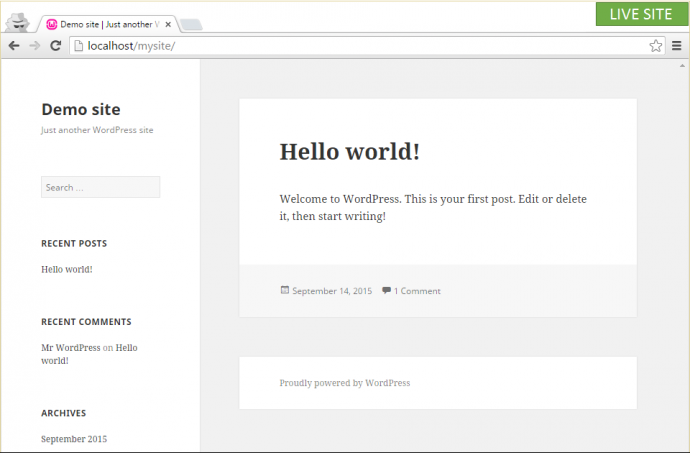 I want to experiment with some new design, and after learning my lessons in the 1.0 Walkthrough, I know it's better done off of the main site. (Having an Undo button is nice, client not yelling at me is even nicer.) So I create a staging environment.

In VersionPress 2.0, this is done through a WP-CLI command. We are kind of in love with WP-CLI, it is an amazing technology but at the same time, we realize not everyone wants or can drop to the command line so in the future, we will have a friendly GUI for this. In v2, however, WP-CLI commands is what there is.

I'll go to the directory where my site resides and run the wp vp clone command in it: 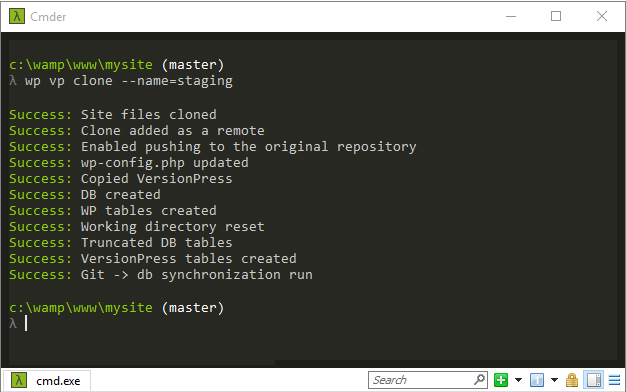 I specified that the clone should be named “staging” and that's the bare minimum I need to do – VersionPress will then create a folder called staging for my clone, new database tables prefixed wp_staging_* (customizable) and do a couple of other things like update the wp-config.php file for me.

After the cloning is done, I have an identical site running at a new URL: 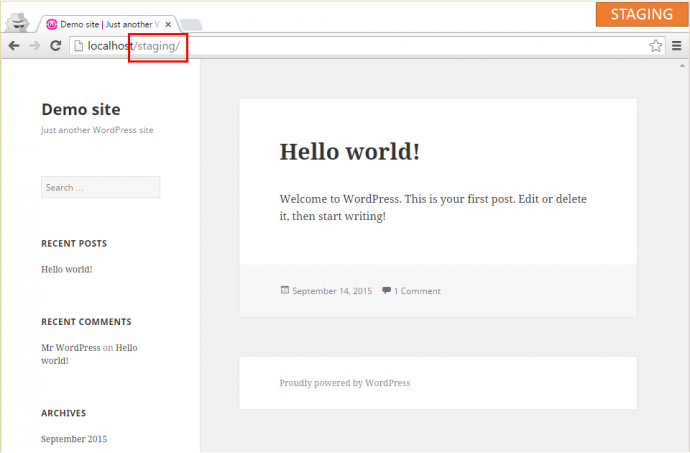 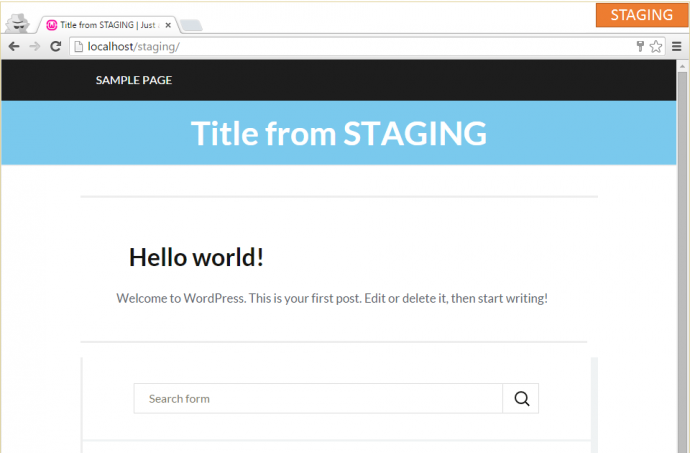 Back on the live site, say that there was a new post in the meantime: 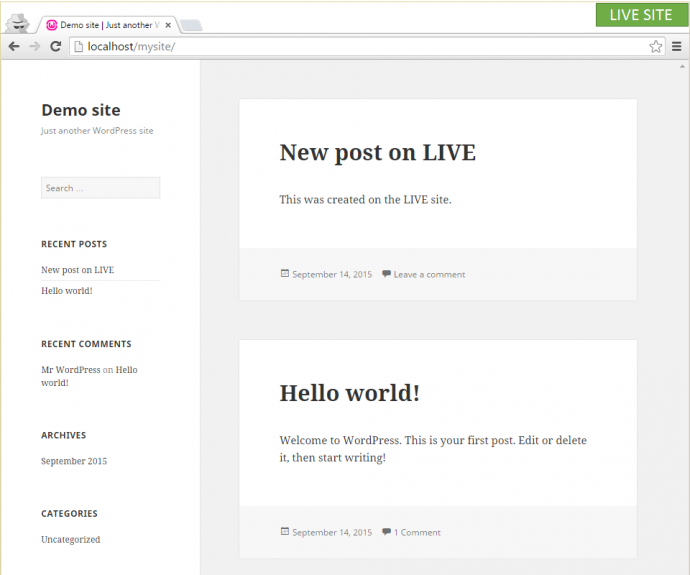 This means I cannot just blindly replace the live environment with the staging one. In the past, this would have been a point where things would get unpleasant – I would need to carefully compare both files and the database of both environments, or, in practice, maybe I'd re-do the changes manually on the live site. This might be feasible in some simpler cases but generally, it is an unpleasant manual process that leaves room for error.

With VersionPress, things are much simpler. I'll just run the vp pull command: 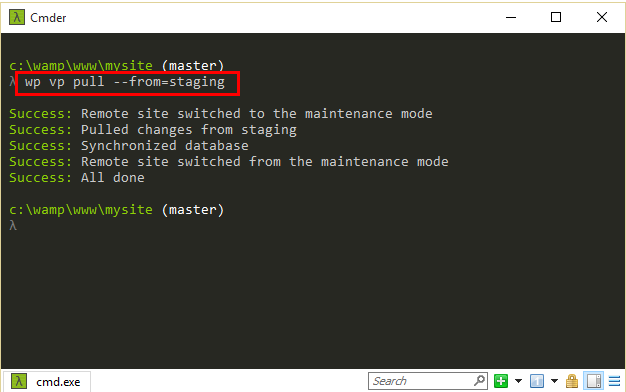 which merges the changes from both environments: 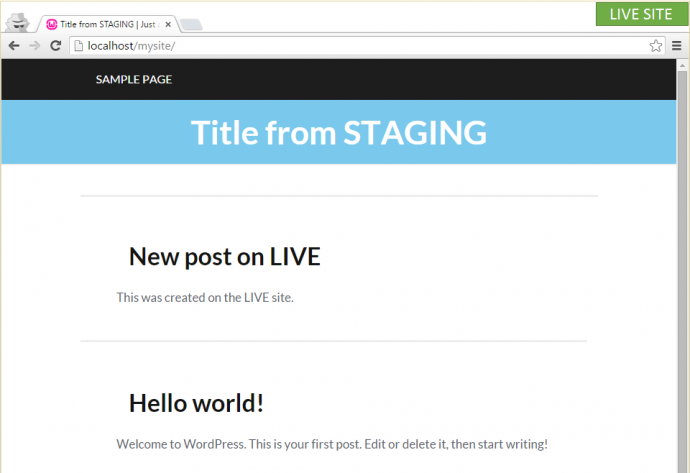 I find this pretty exciting because this workflow works for any kind of change, e.g., updating WordPress, installing new plugins, amending theme templates, etc. Also, the staging environment could have lived for months and contain dozens of changes, it wouldn't matter – I would still just run the simple pull command.

This changes the difficulty or a merge from “hard, sometimes almost impossible” to “piece of cake”. I like such changes.

An important topic is conflict resolution and I'll start by showing that VersionPress' merging is actually quite clever and will avoid conflicts whenever possible.

I'll go back to the initial state and start with a fresh clone. I'll then add a new post on both LIVE and STAGING:

Because of the way WordPress works, this will assign the same ID to both these posts:

Normally, this would be seen as a conflict in most (if not all) tools. Let's try to merge the sites with VersionPress: 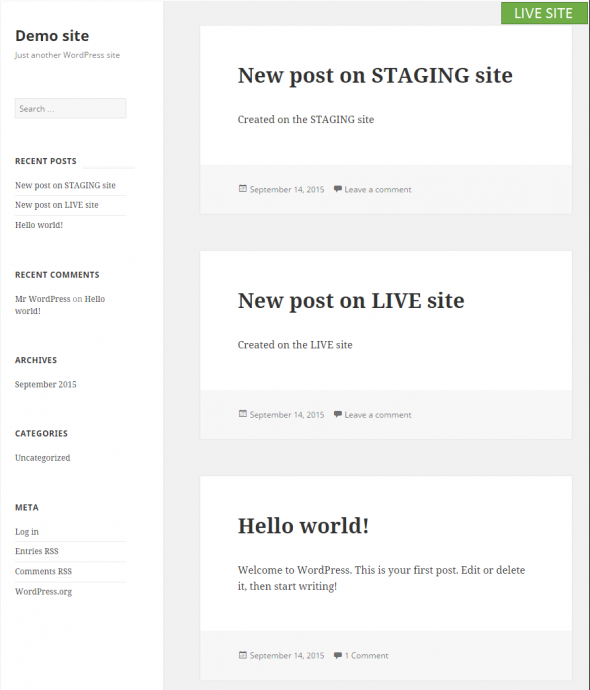 It was able to understand that the two posts are indeed unrelated and simply kept both during the merge. This behavior is extremely useful because it means that merging will be painless most of the time, which is the ultimate goal.

However, what if there is in a real conflict? Like, two people doing a conflicting change on a single piece of data in both environments?

In this scenario, I'm going to edit the default “Hello world!” post in both environments:

This creates a real conflict that cannot be resolved automatically. Let's try to pull now: 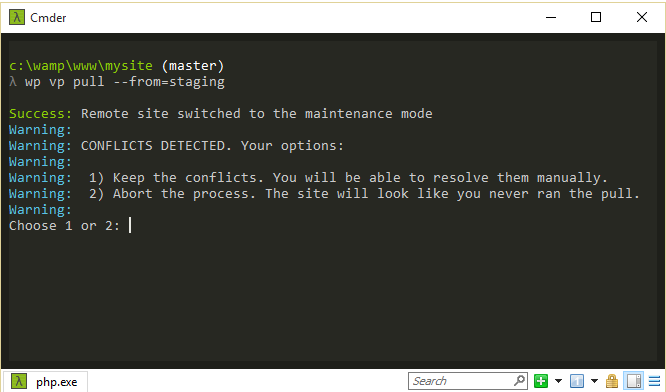 VersionPress was able to understand that this is in fact a conflict and prompts me to resolve it. I'll choose the first option: 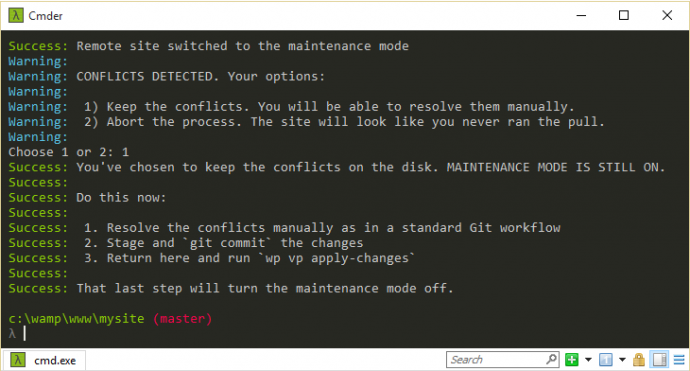 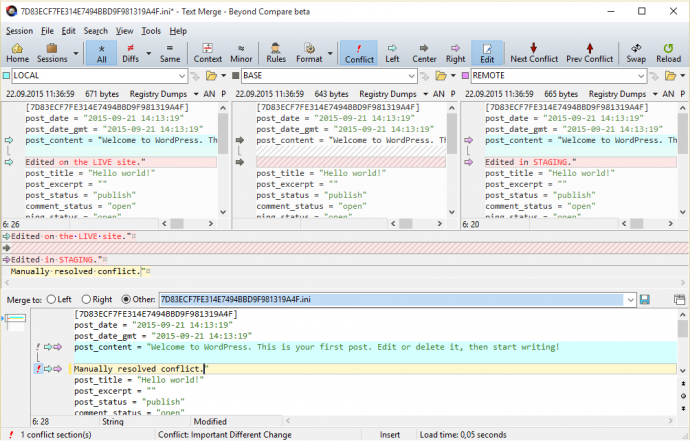 To commit the change, I can again use any Git client I like. I'm going to first mark the conflict as resolved in TortoiseGit:

and then commit the changes: 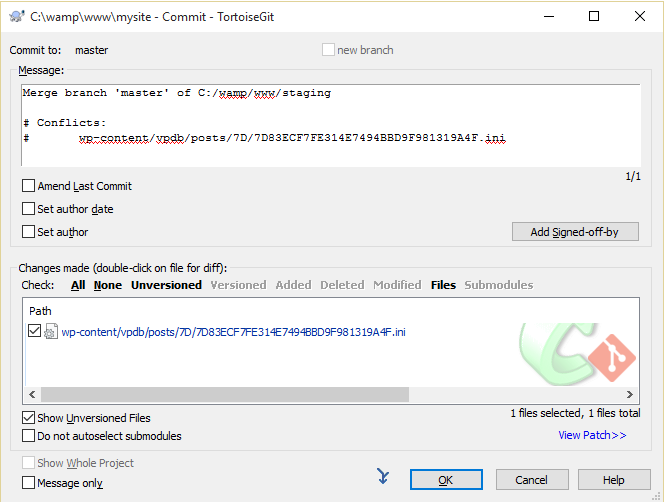 The last step I need to do (as I was instructed above) is to run the vp apply-changes command: 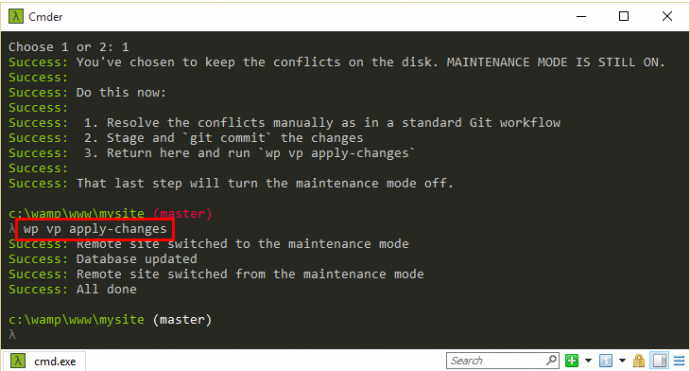 This synchronized the site's database and the live site now reflects the resolved conflict:

I know this is a bit geeky at the moment (again, a UI for resolving conflicts is coming in a future update) but hey, I was able to use Git to resolve a database conflict. I can't tell you how many times in the past I wanted just that!

There's one last thing I'd like to cover, and that is the fact that the site was under maintenance mode until I resolved the conflict. You usually don't want this to happen on the live site, so let's finish with a workflow that deals with that.

So far, I've only used a combination of vp clone and vp pull commands, but there is a third one: vp push. The updated workflow looks like this:

In practice, I can try to pull on the live site but if a conflict is detected, I can abort the pull: 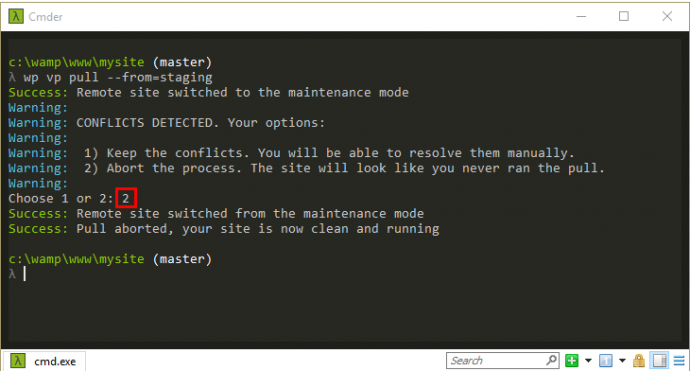 Then I'd go to the staging clone and pull from there. On this separate site where downtime isn't an issue, I'll choose to resolve the conflicts: 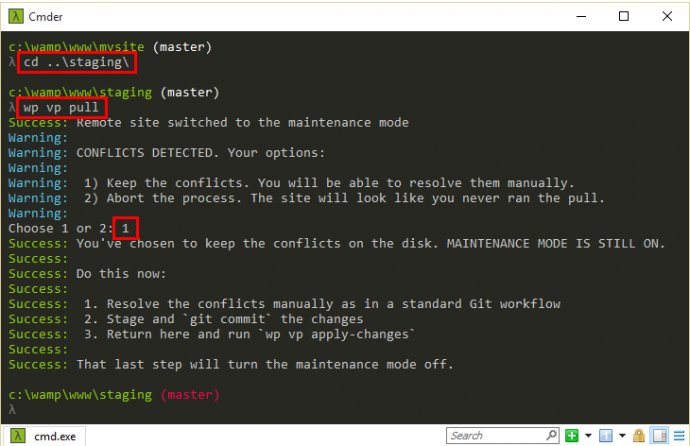 (BTW, you can notice that I ran the pull without the --from parameter. That is because each clone remembers its origin and will pull from there.)

The actual conflict resolution is exactly the same process as I've shown above, so basically I've done this:

After I checked that the merged site looks fine (still on staging), I can then push the changes to the live site: 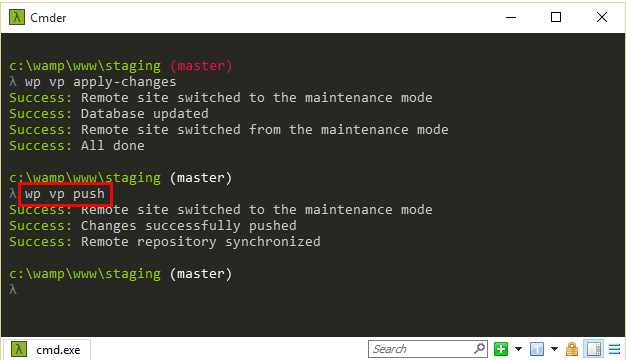 After the push completes, the live site is updated without any unnecessary downtime:

I'll probably stop here as this should cover most of the important scenarios. Just to reiterate, we're still working on VersionPress 2.0 and it is not entirely finished yet but if you want to play with this functionality, drop me a line at borek@versionpress.net and I'll be able to send you the current beta. And of course, if you want to support our effort in the long run, we'll be happy to welcome you in the Early Access Program on our homepage.

Thank you and happy cloning & merging!